A year in which a few Mighty things happened.

One of them was the birth of a boy called Michaël.

This boy started enjoying live by seeing lots of

things happening around him.

He lived at a flat with a tremendous nice view.

High above everything. It was here that he already

(unknowingly) made his decision to become a pilot.

In this year he started his flight course in Valencia, Spain. He had a great time during his course.

It was a period in where he learned a lot! He finished his flight course with a MCC course in Madrid early 2002.

"Bad time" to finish a pilot course since 9-11 just made it impossible to start flying with a airliner.

At the end of 2002 he managed to get a office job within the LVNL (Dutch ATC).

With this job he learned a lot about airspaces.

During his job with the LVNL he decided to do a type rating course for the Boeing 737 in Berlin.

This descission payed off in 2005!

The year he found a job with a dutch airliner. It was also the year he became father of a beautiful daughter.

The year he became father for the second time of a beautiful son. 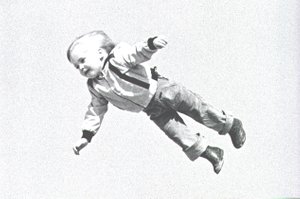 Where does MightyMKL come from.

During my course I had the nickname Mighty. My first name is Michaël sounds like MKL. So this way MightyMKL was "born".